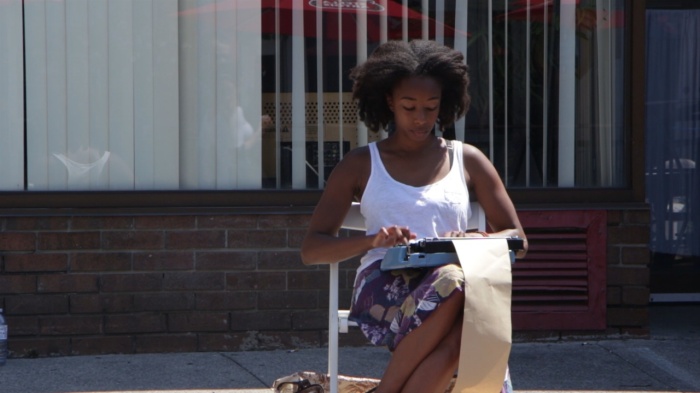 Ms. Whitney French is a long-time friend and collaborator with my-self and my producing partner, Anita Abbasi. This past weekend we followed Whitney as she took her typewriter – an actual typewriter – to the streets of Kensington Market to compose poetry for the public. Three dollars got you an honest-to-goodness French original poem, which she recited upon completion.

Whitney is energetic, endlessly imaginative, and engaging. It is always a joy to watch her work. The marvel of an analogue technology in this modern, iPhone-toting day delighted many who were drawn to the machine and the woman behind the machine as she wrote tirelessly throughout the day. With a three-word contribution on behalf of the patron to help get things humming and a little patience, Whitney wrote poem after poem; by far our favourite was a comical ode to poutine, which had us in stitches.

During the event Anita and I shot some footage for a short documentary project about Whitney’s busking experience. The footage turned out great with Whitney’s personality and candid demeanor shinning through. We’re excited to continue shooting at the next opportunity and capture more of Whitney’s charm and joie de vivre!